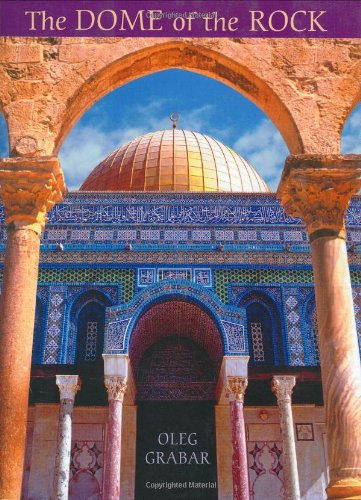 Dome of the Rock

Jerusalem's Temple Mount: From Solomon to the Golden Dome

History of the Israeli-Palestinian Conflict

The Dome of the Rock is not a mosque, but a Muslim shrine. Like the Ka'ba in Mecca, it is built over a sacred stone. This stone is believed to be the place from which the Prophet Muhammad ascended into heaven during his Night Journey to heaven.

The Dome of the Rock is the oldest Islamic monument that stands today and certainly one of the most beautiful. It also boasts the oldest surviving mihrab (niche indicating the direction of Mecca) in the world.

History of the Dome of the Rock

The sacred rock over which the Dome of the Rock is built was considered holy before the arrival of Islam. Jews believed, and still believe, the rock to be the very place where Abraham prepared to sacrifice Isaac (an event which Muslims place in Mecca). In addition, the Dome of the Rock (or the adjacent Dome of the Chain) is believed by many to stand directly over the site of the Holy of Holies of both Solomon's Temple and Herod's Temple.

Actually, according to the Oxford Archaeological Guide to the Holy Land, "Abd al-Malik's purpose was more complex and subtle." He wished to erect a beautiful Muslim building that could compete with the majestic churches of Christendom and would be a symbolic statement to both Jews and Christians of the superiority of the new faith of Islam. "His building spoke to Jews by its location, to Christians by its interior decoration." [1]

In the 10th century, the Jerusalem visitor Mukaddasi wrote of the magnificent structure:

By the 11th century, several legends had developed concerning the Dome of the Rock and its sacred stone, including the following:

In the Middle Ages, Christians and Muslims both believed the dome to be the biblical Temple of Solomon. The Knights Templar made their headquarters there during the Crusades and later patterned their churches after its design. [4]

The exterior mosaics that once adorned the Dome of the Rock suffered from exposure to Jerusalem winters. They were repaired in the Mamluk period, and then completely replaced with tiles by Sulieman the Magnificent in 1545. At the same time, he created the parapet wall with its intricate inscription by filling up the thirteen small arches that originally topped each facade. The windows of the Dome of the Rock date from this period as well. The tiling was completely replaced in the last major restoration in 1956-62.

What to See at the Dome of the Rock

The extraordinary visual impact of the Dome of the Rock is in part due to the mathematical rhythm of its proportions. All the critical dimensions are related to the center circle that surrounds the sacred stone. For example, each outer wall is 67 feet long, which is exactly the dome's diameter and exactly its height from the base of the drum.

The same principles were used in Byzantine churches of Italy, Syria, and Palestine, but none compare to the integration of plan and elevation seen in the Dome of the Rock.

The great golden dome that crowns the Dome of the Rock was originally made of gold, but was replaced with copper and then aluminum. The aluminum is now covered with gold leaf, a donation from the late King Hussein of Jordan. [6]

The dome is topped by a full moon decoration which evokes the familiar crescent moon symbol of Islam. It is aligned so that if you could look through it, you would be looking straight towards Mecca.

The beautiful multicolored Turkish tiles that adorn the shrine's exterior are faithful copies of the Persian tiles that Suleiman the Magnificent added in 1545 to replace the damaged originals. The lower half of the exterior is white marble.

Inside the shrine, an arched wall called the octagonal arcade or inner octagon follows the exterior shape. An open space between this and the central circle forms the inner ambulatory around the Rock, carpeted in lush red. The area between the inner octagon and outer octogan (exterior wall) forms a smaller, outer ambulatory, carpeted in green. The two ambulatories recall the ritual circular movement of pilgrims around the Ka'ba in Mecca.

The cupola, the interior of the great golden dome, features elaborate floral decorations in red and gold, as well as various inscriptions. The main inscription in the cupola commemorates Saladin, who sponsored extenstive restoration work on the building.

The mosaics of the interior feature both realistic and stylized representations of vegetation and related themes (Muslim law forbids the representation of living beings in art). The mosaics evoke an exotic garden, perhaps the gardens of Paradise. Rich jewelry is also depicted in abundance, including breastplates, necklaces, and a Persian crown with features gathered at the base. The caliph Omar had conquered Persia in 637, and the mosaics symbolize the Persian crowns he sent to hang in Mecca.

The founding inscription is a monumental 240-meter long line of Kufic script running along the top of both sides of the octagonal arcade inside the Dome of the Rock. On the outer side of the arcade, the inscription quotes Quranic verses glorifying God.

On the eastern side, an inscription gives credit for the building's construction to the Abbasid caliph al-Mamun in the year 72 AH (691 AD). However, al-Mamun reigned from 813-33 AD, so the inscription clearly represents an Abbasid effort to claim credit for the achievement of the previous dynasty.

Much of the inscription on the inner side of the octagonal arcade exhorts Christians to depart from error of the Trinity and recognize the truth of Islam:

The columns supporting the inner octagon and the center circle are of different sizes; they were recycled from previous structures. The crosses on some show them to have been taken from churches. The carved ceilings on either side of the inner octagon were not part of the original design; they first appeared in the 14th century and have been restored since then. The Mamluk star is the dominant motif.

The small, flat mihrab (niche showing the direction of Mecca) belongs to the original building, and is the oldest mihrab preserved in the Islamic world. The wooden screen around the sacred rock was donated by the Ayyubid sultan al-Aziz in 1198. The Crusaders protected the rock from relic-snatching pilgrims by erecting a wrought-iron screen between the columns of the circle; it remained in place until 1960 and is now on display in the Islamic Museum.

The sacred rock that is the central focus of the shrine is a large, ancient rock that may have once stood in the center of Solomon's Temple. For Jews, it is the rock on which Abraham prepared to sacrifice Isaac. For Muslims, it is the rock from which Muhammad's winged horse leapt into the sky, accompanied by the Archangel Gabriel, on the "Night Journey" into heaven (Qur'an 17). The rock is said to bear the horse's imprint. Muslim tradition holds that an angel will come to the rock to sound the trumpet call of the Last Judgment at the end of the world. [7]

The reliquary next to the rock dates from the Ottoman period and contains a hair of Muhammad's beard.

The cavity beneath the rock, accessible by a staircase near the south entrance, is known as Bir el-Arwah, the "Well of Souls." It is said that here the voices of the dead mingle with the falling waters of the lower rivers of paradise as they drop into eternity.

Another legend says that the dead meet here twice a month to pray. In earlier days, those who prayed here after having walked around the rock were given a certificate entitling them admission to paradise; it was to be buried with them.

Quick Facts on the Dome of the Rock

Map of the Dome of the Rock, Jerusalem

Below is a location map and aerial view of the Dome of the Rock. Using the buttons on the left (or the wheel on your mouse), you can zoom in for a closer look, or zoom out to get your bearings. To move around, click and drag the map with your mouse.