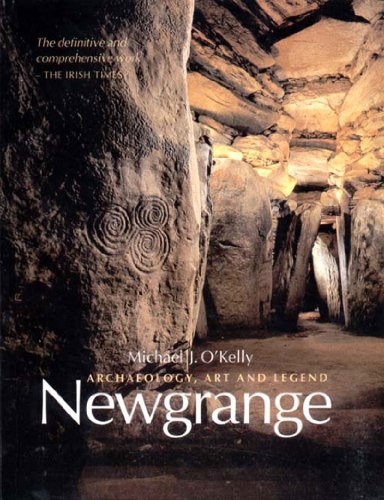 Newgrange is the finest of some 26 ancient tribal burial chambers in the Boyne River Valley north of Dublin. A great round tomb with fine rock carvings, Newgrange is about 5,000 years old - making it centuries older than the Great Pyramids of Egypt and a thousand years older than Stonehenge.

Newgrange's astronomical alignment, striking round shape and spiral designs all add to the mystery and wonder of this ancient site, and prompting much speculation as to its purpose and meaning.

Newgrange has been dated to about 3200 BC (more broadly 3300-2900 BC), during the Neolithic period. It is not known for whom the tomb was built, but it was clearly the burial place of great tribal leaders. The kings were cremated and their ashes were interred here.

Scholars are generally agreed that Newgrange was used not only as a tomb but for ceremonial and religious rites. Legend says the mound was dedicated to Dagha, the sun god of pre-Christian Ireland, and later became the burial places of the pagan kings of Tara. Veneration of the sun is certainly suggested by the many carvings of sun symbols on Newgrange stones and the magnificent spectacle of sunrise on the winter solstice (see Astronomical Alignment, below).

The mound subsided not long after completion, burying the kerbstones and collapsing the quartz facade, but Newgrange remained an important religious center until the early Bronze Age. A cursus oriented north-south about 100 m east of the tomb was built in the later Neolithic Age, followed a little while later by a henge to the southeast. The standing stones around the mound were probably erected after this.

Unfortunately, the tomb has been empty of its original contents since 861 AD, when it was plundered by Viking raiders. More recently, there was a period of over 100 years during which the tomb was discovered but unprotected; it thus suffered further damage from treasure hunters and looters.

The many mysteries of Newgrange — who built it? what were its purposes? what do the spirals mean? — have prompted a variety of theories about its origin and purpose. Newgrange is especially revered by New Age adherents, who believe it to be a place of great energy and mystical power.

The spirals are interpreted as symbols of the journey to the next world, and the tomb is thought to be a solar temple of a prehistoric race of supernatural people. Based on its shape, it has also been suggested that Newgrange is a model of a flying saucer.

What to See at Newgrange

The Newgrange tomb rises from the meadow in an egg-shaped mound called a tumulus. It is 250 feet across and 40 feet high, and covers an entire acre.

The exterior of the mound is decorated with 97 large kerbstones (or curbstones in the American spelling) that are carved with beautiful and intriguing spiral designs. Scholars think these stones were recycled from an earlier burial place.

Three of the kerbstones are especially striking: the Threshold Stone or Entrance Stone; Kerbstone 52, located diametrically opposite the entrance on the northwest side; and Kerbstone 67 on the northeast side.

The Threshold Stone is elaborately carved with spirals, concentric circles and diamond shapes. Their meaning is not known but theories are plentiful. Some hold that the three main spirals represent the tombs of Newgrange, Knowth and Dowth, with the wavy line below depicting the River Boine. Others think the three spirals represent life, death and eternity.

The facade around the perimeter is made of sparkling white quartz brought from 50 miles away, punctuated by egg-shaped granite stones. The facade has been shaped by archaeologists to allow for visitor access; the dark stones that curve inwards were deliberately chosen to show they are not an original feature of the tomb. Originally, the white facade continued over the Entrance Stone, with a narrow recess leading to the roof-box and entrance. The "roof box" allows sunlight in on the winter solstice (see below).

The mound itself is made of 200,000 tons of stone brought from 75 miles away, which were then covered with several yards of soil. The boulders were placed with amazing precision that makes the structure watertight; just how this was done remains a mystery.

Inside, a 60-foot-long narrow passage leads into a domed chamber almost 20 feet high with three side alcoves for burials. The inner room is made of layered stones forming a corbelled roof or beehive vault, which has held the weight of the mound above without mortar and without leaking water for over 6,000 years.

The side alcoves contain mysterious stone basins, whose purpose is not known. They may have been used for washing bodies, receiving funerary offerings, depositing the ashes of cremated remains, or for priestly rituals.

The most striking aspect of the Newgrange tomb is its precise astronomical alignment, which allows for a truly spectacular phenomenon at sunrise on the winter solstice (December 19-23, especially the 21st). On this day, the shortest of the year, a shaft of sunlight enters through a large opening above the entrance (called the roof box) and pierces the inner passageway.

The sunbeam touches a stone basin at the end of the passageway and lights up a series of spiral carvings inside the chamber, whose meaning is unknown. The event lasts about 17 minutes.

The guided tour of the tomb includes an impressive reenactment of this effect, and a lucky few each year also experience the real thing - you can enter your name in a lottery for a chance to join.

Twelve standing stones still survive in a circle around the tomb, of which there may have originally been as many as 35. Archaeologists have not been able to determine their date with certainty, but at least one of the standing stones has been shown to post-date the henge south of the mound, which was made in the later Neolithic period. None of these stones are decorated with carvings.

Now marked by modern wooden posts, the henge at Newgrange was built several centuries after the main passage tomb. The pit-and-post circle measures about 394 feet (120 m) in diameter and evidence of occupation was found inside it, including almost 800 pieces of flint and pottery from the Grooved Ware and Beaker periods. Some of the pits contained animal bones, which were probably votive offerings.

Newgrange cannot be accessed directly; you must visit on a guided tour that leaves from the Brú na Bóinne Visitor Centre.

From Dublin: Take the M1 motorway heading north, leave the motorway at the Donore Exit near Drogheda, (Brú na Bóinne is clearly signposted before the exit). There is a toll of 1.50 Euro before the Donore exit. Travel about 6km (4 miles) to the village of Donore, turn right passing Daly's Brú na Bóinne Bar and Restaurant on the right, travel about 1km, the Visitor Centre car park is on the right hand side.

Or, take the N2 heading north via Ashbourne towards Slane in Co. Meath. Turn right about 2km south of Slane, the Brú na Bóinne Visitor Centre is 7km (4.5 miles) east towards the village of Donore. For about 3km before the Visitor Centre the road follows the bend in the river Boyne.

Alternatively, you can join a guided day tour to Newgrange that leaves from Dublin.

From Drogheda: Bus Eireann runs a service to the gate of the Visitors Centre. The journey takes 20 minutes and there are six daily from 10:15am to 4pm.

Below is a location map and aerial view of Newgrange. Using the buttons on the left (or the wheel on your mouse), you can zoom in for a closer look, or zoom out to get your bearings. To move around, click and drag the map with your mouse.